By Abdan Syakuro at 06:43
Advertisement
99 Names Of Allah - Asmaa'u Allah Al-Husna are the names of God in Islam.  They are described in the Quran and Sunnah, among other places.

"The most beautiful names belong to Allah: so call on him by them." (Glorious Qur'an 7:180)

He is Allah the Creator, the Maker, the Fashioner; His are the most excellent names; whatever is in the heavens and the earth declares His glory; and He is the Mighty, the Wise. (Glorious Qur'an 59:24)

Muhammad (salAllahu alayhi wasalam) said: 'Allah the Most High has ninety-nine names. He who retains them in his memory will enter Paradise'

He (salAllahu alayhi wasalam) also said: 'No-one is afflicted by distress or anxiety  then invokes Allah with this supplication, but Allah will take away his distress and grant him happiness instead' 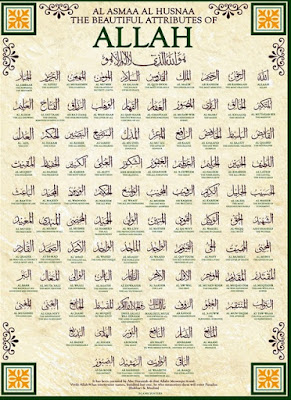